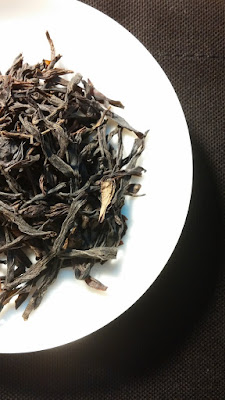 Fenghuang Dan Cong is a strip-shaped high oxidized Oolong from Chaozhou in Guangdong Province. The name literally means "Phoenix [mountain] Single Bush". As you would expect, "single bush" nowadays is really rare, thus the term became generic for all the Phoenix mountain Oolongs of that style. By the way you do not pronounce it "Dan Kong", but more like "Dan Tsong"!

Chaozhou is well known for its most refined tea ceremony style, some say it also claims to be the origin place of Oolong itself (just like all the other regions...). I was interested what tea you could expect to be grown in this region.

Since for me Da Hong Pao is the prototype of Chinese dark Oolong, and as the looks also sort of correspond, I involuntarily imagined it being similar to that, despite well knowing what differences you should actually expect from different regions. I normally try not to inform about popular taste interpretations of the teas I drink, to be unbiased in my own perception. If I had, I'd also never thought it to be Da Hong Pao like, as Dan Cong is known for being a doppelganger tea "mimicking" all sorts of tropical fruit.


My Chaxi reflects the black and blue tints of the dry leaves (and also for Oolong being known as Qingcha, blue tea, I found it legitimate). This dark background works perfectly as a stage for the light liquor, supported by the light bamboo plank.

After preheating, I fill my round Zisha pot around half-full with the nice long leaf strips. Thirty second steep. At first, I can't figure out what the lid scent reminds me of. But it's infact vanilla!

The liquor looks sort of fruity to me (rightly so), a dark golden orange colour really similar to the teapot actually.
Now the taste. Like I said, nothing like DHP. It's suprisingly light. At first, I taste a lemon peel reminiscence, but then the main course: Cantonese mandarin. That consists of some very discreet acidity first, and late growing sweetness in the aftertaste.
The following infusions enhance the aroma by a ginger note, which also starts to consort with the mandarins in the taste (without being ginger hot of course). Another less acidic fruitiness joins, I interpret it as apricot.

When I start to notice no more profile changes but rather thinning, I try killing it with a really long last infusion.

The dark colour of the brew is restored after having become gradually lighter before, so far so good. But the taste has gotten very confusing! Actually strengthening mandarin, ginger and the general intensity of flavour, this infusion has added a strange astringency I didn't expect to be possible. But worth a try!


The leaves somehow don't manage to open up completely, even after another day-long after-infusion I sometimes do for teapot seasoning, they're still a bit rolled. Well, I won't bother them any more! 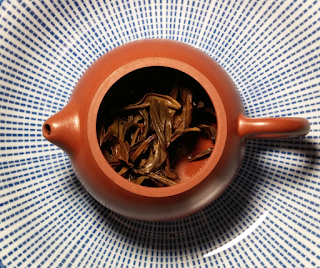 Thanks for reading!
Posted by Christian Zieger at 13:10