Yunnan, the epicentre of darkness! (At least on a tea level). While with Pu Erh, it includes the main (but not only!) production region for the fermented Chinese black tea, 黑茶 (hēichá), called dark tea in the west, Yunnan produces other teas as well, most of them being are still quite dark. I'm now speaking of the western black tea, which in China is called red tea, 紅茶 (hóngchá).

Confusion goes on as this organic Yunnan Black Moonlight is infact a Pu Erh tea, but not a black tea, rather a red tea. And it's not only from this region, but also made of the typical old trees' big leaves. 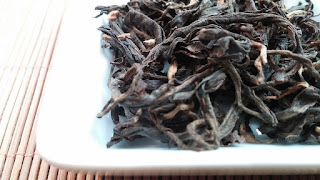 Concerning the name, I heard somewhere that it's actually harvested under the moonlight, but that sounds sort of made up to me, especially considering that it's not even bushes but high trees to pluck from. So I'll give you the more reasonable story: The Bai Hao Oolong-like white tips, of which many can be found in this tea, make it seem like bright moonlight shines onto the leaves laying in the night's darkness. They also leave back quite a lot of golden fuzz in the tin, lovely! 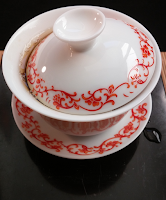 The Gaiwan I chose to use is a bit headstrong with its red-orange ornaments. Obviously it has a good symbolic fit with red tea, but the tint of the painting doesn't really match any of my other wares. Having the rest of the setting comply with it, I managed to house it though.

Hence, my Chaxi consists of black and earth tones with a lovely bamboo scroll, coasters in different shades and shapes of black and my animalistic Zisha tea pet, Jin Chan, who keeps tabs on my brewing. Jin Chan, also known as the Money Toad, is said to bring luck and prosperity when arriving on full moon. The moon was indeed full in the night before I drank this tea, and its name even supports it. So when if not then should Jin Chan appear! As for the teaware itself, I chose a plain white pitcher I recently got quite cheap, and a nice clay cup which is glazed white on the inside.

I put a good amount of the handsome leaves in the hot Gaiwan and do a very short first brew. Intense colour right away, as you would expect. The lid smells after flowers, and a bit malty. Neat. 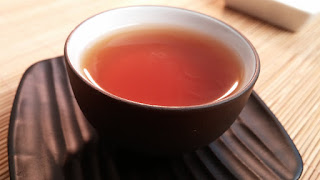 The dark caramel red liquor perfectly joins the colour palette. The floral aroma can be tasted as a chary sweetness. There's also this very small malt portion again. Malty taste is an interesting subject I think. If it's too present, I normally dislike it, but it can really add something if it's "well dosed", as it is in this tea.


Going on, this drink starts quenching a thirst I didn't even know I had. Addicting! Somewhere in the middle, I even believe to sense some creaminess.

Overall, Black Moonlight is a very gentle and smooth red tea. It has no bitterness at all and is very pleasing, similar to a good shu/ripe or well aged sheng/raw Pu Erh (Pu Erh now understood as the common generalised term for black/dark tea).


Thanks for reading!
Posted by Christian Zieger at 10:46