Some time ago, my local tea shop added two bird's nest Pu Erhs from CNNP Kunming to their product range, one raw/sheng and one cooked/shu version. They are both reasonably priced and not very large, so of course I instantly bought one exemplar of each. This raw one was harvested in Spring 2012. I have stored it in my pumidor for a few months now. 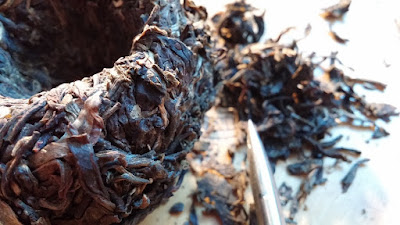 In my Chaxi, I've integrated one of my new Jingdezhen cups with its beautiful inside and outside painting and calligraphy, as well as a rough white wood tray I stumbled across recently. I've placed my Tetsubin on a blue brook flowing into a bigger sediment-coloured river. The other teawares float with white boats on this, similar to the picture in the cup (https://www.instagram.com/p/BBnPyiiPIve/?taken-by=leonardoziecaprio).
Buddha has also decided to join me (and conveniently sit on the water surface).

I have plenty of time and so come to try if it's possible to boil the water just with tea candles, since they're able to keep it around boiling during Gongfucha. I light four of them and put the Tetsubin on top. Long (waiting) story short: It doesn't really work. Maybe within an hour it could, but I decide to give up and boil it with the induction cooker I normally use. I find this funny by the way, such a traditional, plain iron kettle happens to work so well with this modern technology. 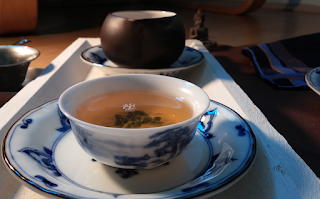 The leaves smell ethereal like freshly cut wood. I give them a rinse and go on flash infusing for nearly the whole session, no need to elongate the steeping with this one much. The liquor is already very colourful for this age I'd say, a nice soft orange which perfectly combines with the Jingdezhen cup's blue to this peachy tone you can see on the right. I smell autumn foliage and a very light hint of dry tobacco. Not that euphemistic tobacco attribution you'd use for a nasty fusty Pu Erh, but rather a nice little spice addition.

The taste is composed of canned pineapple, i.e. a thick sweetness with some fresh acidity, blueberry flavours and a bit of dryness or astringency, which is really not very strong though. It's not the most complex tea, but a firm young Sheng for a good price which is well drinkable right away. I don't think one should try to age it though, it doesn't have this ageable kind of energy in it. 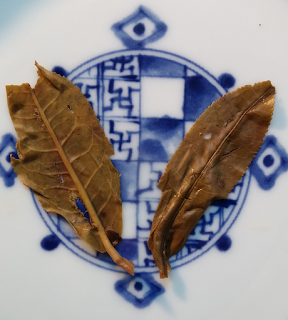 Thanks for reading!
Posted by Christian Zieger at 23:54