Yunnan, the epicentre of darkness, at least on a tea level! Even the white tea is dark somehow. As tonight will be new moon, I chose the white tea counterpart of my Yunnan Black Moonlight I drank last full moon. Would've made more sense the other way round maybe, but sometimes contrasts match even better than similarities. For example in this tea. 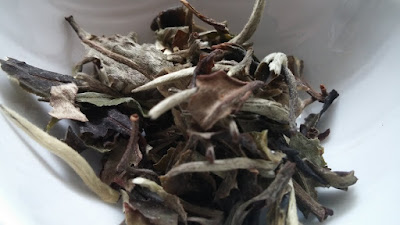 The dry leaves are so diverse and interesting, I could spend at least 15 minutes just trying to figure out what different elements there are. There's the obligatory white fuzzy buds of course. This tea has rather large and straight ones mostly. But then you also find oddly dark leaves, some of them brown and some even completely black. There has definitely some oxidation (or even a lot?) been going on. Dry smelled, they promise much fruitiness mixed with a walnut aroma and somehow remind me of this mixed indefinable scent prominent when you enter any given tea shop.

I arrange the Chaxi on a white cloth with white porcelain, combined with black and brown details to resemble the different leaves. Jin Chan was invited again, despite probably being off duty at new moon. The brewing vessel is a new white Gaiwan I got from Teamasters after I'd broken the lid of my other one. It is unusually thick walled and is probably ideal for hot infusions. For the white tea however, I use my Yuzamashi to bring the water under 90°C. 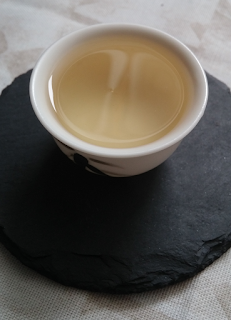 I start with a slightly longer infusion, let's say 20 seconds. The lid smells intense. Sweet and floral. No surprise that the creamy yellow liquor is more colourful than other whites, you could even mistake it for a light Oolong.

First sip. It's buttery and sweet, especially the aftertaste. I taste orange juice and orange blossom. It has a lot of energy and a discreet yet interesting pungency to it. I do only quick infusions for the rest of the session, this tea needs no extra time to think it over. It's very confident. The sweetness becomes a bit dry after a while, and aromas of vanilla and washed out wood appear.

I'm not the biggest fan of white tea per se, often it's just a bit too light and subliminal for my taste. On the other hand, "pure" white tea, i.e. Silver Needle, is intense but I couldn't find enjoyment in its pure woody bud taste yet. Now, White Moonlight really hits the target for me, bringing a lot of flavour, balanced and complex, with the right amount of woodyness. 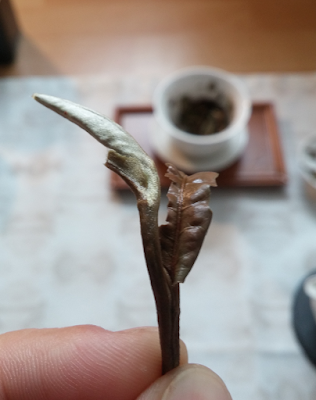 Posted by Christian Zieger at 14:09