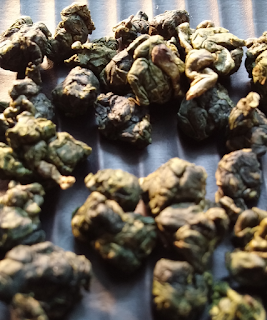 金萱, jin xuan, literally means "golden daylily". The tea is however more famous under the name milk(y) Oolong. It is said to have a natural creamy, milky taste, which is sometimes enhanced by really steaming it in milk during production. This one is untreated though.

It is grown at an altitude of 1200 metres on Ali Shan in Taiwan, thus categorised as a high mountain tea. As usual for these, it has not been oxidised very much to lay the focus on the fresh, high notes which are speficially developed in high altitute cultivation. You can see that the ball rolled leaves are very green.

Let's see what it can do.

My Chaxi symbolises the slowly approaching spring. Today is not really a spring day as you would imagine. It's raining. But it's this kind of rain which to me always seems to intentionally occur for the sake of the vegetation. Not heavy and aggressive, but rather a dense, soft kind of spray rain. In combination with the indirect, cloudy daylight, this makes lawn, bushes and hedgerows look all shining, intense and - obviously - green. I guess the green Oolong leaves also match that quite well. The bamboo resembles the wood of the still rather bald trees waiting for the rest of spring to arrive. 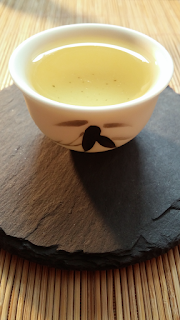 Now to the tea. Gaiwan lid: Very vegetable smell. The first two infusions seem rather thin, but could also be me, my mouth and I. The liquor is very light and has an intense green glow (that I couldn't really catch in a picture unfortunately). After a while, the flavour appears. I taste discreet sweetness, soft vegetables with slight bitterness, like zucchini or aubergine, well pan-fried with oil.

Later I think of avocado as well. It lives up to the eponymous creaminess, I don't exactly think of milk or butter though, there's other Oolongs delivering more of that. The high mountain energy makes it too fresh to count as milky for me.

Speaking of energy: Later infusions increasingly add a minty, mouth cooling spin to it, staying in the mouth for quite a while. 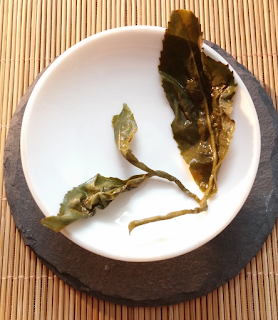 Some of the spent leaves are broken, but mostly intact with one or two partners on a twig. I'm surprised how big they actually are. I imagine them to make for a good cold brew, so I prepare a litre and let it steep for the rest of the day. 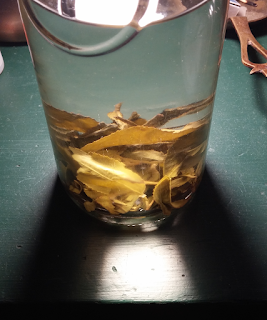 After about 10 hours, I give it a try. Not as intense as another Oolong I recently cold brewed after regular brewing, but still very energetic. Despite not bearing any visible colour whatsoever, the cold tea liquor is quite brisk and fresh. There's none of the creaminess left, it's rather comparable to water with a splash of lemon juice. Looking forward to drinking the rest of it tomorrow.


Thanks for reading!
Posted by Christian Zieger at 22:21