I always like to support organic farmed tea. It is kind of difficult though, when trying to get something from not Japan which is skilfully made and interesting as well. This tea complies with both being organic and being an artisan product, so I was attracted and put some in my shopping cart.

As stated on the package, it is grown at an altitude of around 800m in Lugu, which lies at the very center of Taiwan. It is hand-picked, as will become evident later when investigating the brewed leaves (see below). The light roasting has left large portions of the ball-rolled dry leaves in a nice olive green. 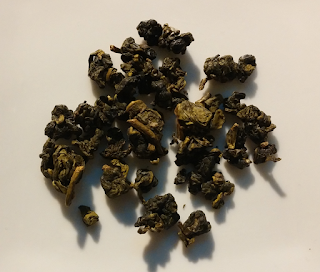 I felt like arranging my Chaxi authentically on the floor today. The white cloth is a very friendly representation of a cloud, as the actual sky is completetely covered in dark grey ones today. One may rather interpret the greater grey cloth as that. The blue in the middle doesn't have so much meaning (it would be a lie if it stood for a blue sky beneath, because there's just nothing like that in sight), I just think blue to be the best contrast colour to grey.

First brew after preheating my 120ml white Gaiwan. I give it just under a minute. The lid smells beautiful. A bit like a lower oxidised version of an Oriental Beauty, combined with strawberry. The liquor is clear and very light, with an interesting mint-infusion-like yellowish green tint. 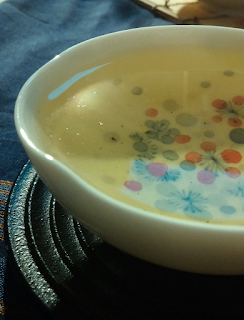 There's a white bread sweetness, with a note of lemon juice, and the aftertaste gives me some strawberries as well. A second flash infusion unfortunately doesn't produce this nice green colour again, this time it's just yellow. Somehow matchingly, the lemon juice flavour becomes more prominent. More acidic strawberries now, so to say. but still sweet overall. I'm not sure if I feel a nice bit of astringency after swallowing or if I just scalded my tongue. Since the tongue is fine post-tea, I believe it's the other thing. I do a third and some further infusions, but the tea surprisingly gives up rather quick. The flavours start to fade and I can barely smell anything from the lid anymore. It still serves well as a refreshing drink, maybe it's just not so much the tea for a stormy Februrary day. EDIT: I retried this with a bit more leaf, leaving the other parameters the same. It lasted around 7 steeps with less fading this time. Additionally, the plain yellow liquor got enhanced with a subtle pink peachy tint after a while. 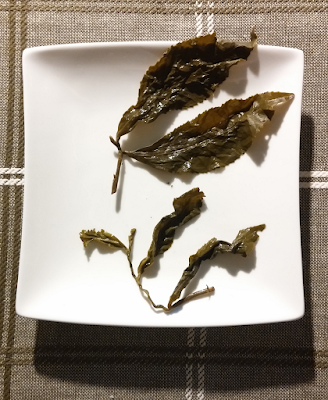 In the end, the leaves have unfolded to show how big they are. Here you can see both the low altitude and the hand-picking, without which, respectively, the leaves couldn't have grown so big and there wouldn't be those complete leaf and stem sets. They have a quite unspectacular yet uniform dark olive colour.
Thanks for reading!
Posted by Christian Zieger at 19:30